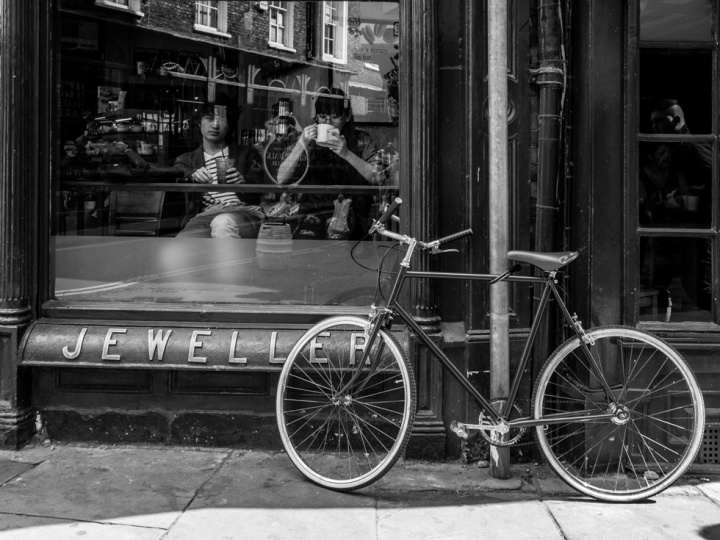 I’m quite fond of shooting black and white – it has a certain charm and character that can turn a scene that looks mundane in colour into something with impact. Although I use my camera in RAW mode, I often use the black and white film simulation so what I see on the screen and in the viewfinder is not in colour. Since I’m shooting RAW I can always process the image in colour later on, but limiting things to black and white at the point of capture helps focus my attention. It makes you acutely aware of how the light falls on your subject, the shadows that it forms and the contrast between them.

Here’s a selection of some of my favourite black and white shots taken over the past few years, I hope you enjoy them. The featured image above was taken in York and shows one of the historic shops that now serves as a café.

The Angel of the North is an amazing piece of art. Although the sky was interesting when I took this shot, the light itself was rather flat. The stark (and I’m going to be using that word a lot here) metal work vs. the fluffy clouds makes for a nice contrast. This is a shot taken with the Samyang 8mm fisheye, note how keeping the subject level and dead centre avoids almost all obvious distortion in it but lets the foreground curve wildly.

I saw this young guy while waiting for a tram in Manchester, he was totally engrossed in whatever he was listening to and focused on his iPod. The light was flat and boring but I was close enough to make good use of the 60mm’s creamy bokeh for some nice subject separation.

This is an older shot from my archive taken with my last Nikon DSLR. Returning from a friend’s wedding on a cold November morning, the bright sunlight and interesting details of the station along with my friends somewhat eccentric dress sense made for a nice shot. The slightly sinister figure in the background adds a bit of intrigue as well.

Markets are often full of photographic opportunities, but this is the one shot I was really pleased with after spending some time going around Leeds’ indoor market. I’m still not very good at getting in people’s faces to do street work, but I like to think that the nice light and interesting shadows make up for the turned backs in this one.

These are the market stalls in Hebden Bridge after all the traders have cleared up and gone home for the evening. The stark, angular nature of the subject lends itself well to black and white.

Peering into a dilapidated old farm building with my X-E1. These kinds of spaces are always interesting when full of old junk, strong light from the window picks out the details nicely.

I took this shot of the pier on a grey day in Whitby. The stark lines created by the planks nicely lead your eye into the shot. As the shot is split pretty much 50/50 between seascape and sky, I like how only the beacon breaches the skyline.

Ice and snowy scenes make for excellent black and white shots, using punchy contrast helps to emphasise the fine details. I took this shot in Horsehold using my old 135mm Takumar. The stream that cascades down the gorge there was full of amazing icicles. With such a long lens, in less than perfect shooting conditions, a tripod was essential. I often lug a tripod out and don’t end up using it, but this was one of those times I was really thankful I’d brought it along.

Light snowfall is great for picking out the details in a scene, in this case nicely outlining the chimney pots and pipes in a stonemason’s yard.

Finally, this is a shot of local landmark Stoodley Pike, in the snow against a dramatic sky. If you’ve enjoyed looking at these photos please consider supporting me by contributing on Patreon on by purchasing a print from the shop.