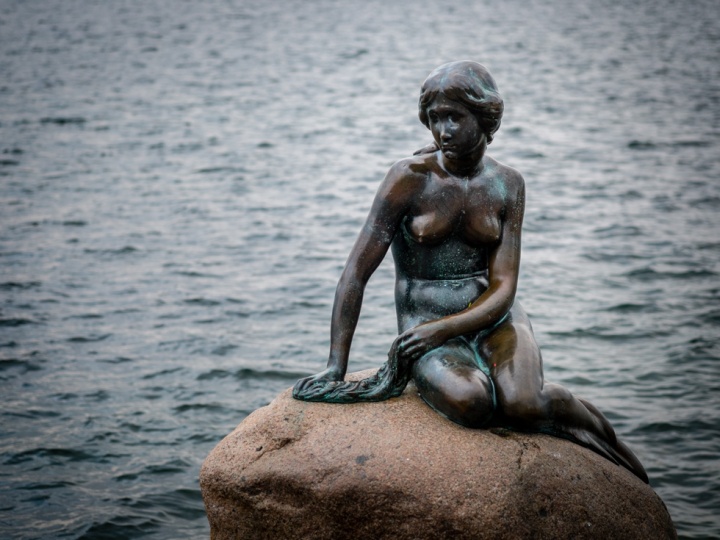 I went to Copenhagen with my partner for a short holiday this April. Copenhagen is a really beautiful city that strikes a good balance between preserving its history and being modern. I’ve been meaning to see more of Europe for some time now, so it was great to experience a bit of Scandinavia. Denmark is sufficiently different from the UK to be really interesting, but familiar enough to feel comfortable. This is helped particularly by the excellent English most people are able to speak, that makes life so much easier for foreign tourists. We were very lucky with the weather, although it was grey and wet on the day we landed, every other day was glorious sunshine and blue skies.

One advantage of the poor weather on the first day, was that when we got to see the famous Little Mermaid statue it wasn’t crowded with tourists. A couple of days later when we passed it while doing a canal tour, people were swarming over it like flies. Every cloud has a silver lining as they say!

I’m going to try and structure this article around topics, so lets kick off with architecture.

This curvy office building, which is the headquarters of financial group SEB, has an organic feel. The 60mm is great of picking out little details like this with minimal distortion.

The National Gallery of Denmark neatly ties old and new with a glass covered atrium. Here I used the 18mm in portrait, but decided later to crop square as the rest of the image wasn’t conveying anything extra particularly.

This is a detail of the arches around the square at Christiansborg Palace. Taken during golden hour, I love the warm light and soft shadows.

Bicycles are everywhere in Copenhagen, even where they shouldn’t be! Most main roads have cycles paths and separate traffic lights for cyclists to keep things safe.

I didn’t spot many restaurants that specialised in Danish cuisine, most places sold Western or Asian food. I was surprised by the prevalence of sushi restaurants in particular. I liked this grungy old neon sign for a seafood restaurant.

This obelisk outside the old university building is one of many public artworks around Copenhagen. Almost everywhere you go you’ll find impressive statues. Despite the intense near mid-day sun the X-E1 did a great job metering this scene and I managed to avoid lens flare luckily. I use a screw-in filter on my 27mm lens and I’m sure it helped here.

Christiania is kind of a hippy community where drug use is rife and many people are openly using marijuana. In the so called ‘Green Light District’ there are lots of signs requesting visitors not to take pictures, so the shot above is more on the outskirts. It’s a shame as the center is very visually interesting, with the old buildings covered in elaborate graffiti.

Below is another shot from Christiania.

Nyhaven is one of my favourite areas in Copenhagen. The canal is surround by beautiful painted buildings, lots of which contain bars and restaurants that spill out onto the street. Various old wooden sailing vessels and other historic boats are moored along it too, further adding to the atmosphere. The shot above was taken on a Sunday evening when it was relatively calm and peaceful. During the daytime and on Friday and Saturday night the place was heaving with people.

I’ve got too many photos from Copenhagen to put them all in one post, so look out for part 2 of this article soon.