When I was a Nikon shooter I was always quite fond of the 70-300 VR zoom lens. It wasn’t technically super sharp at the long end, but it had good range and nice bokeh. After moving over to the Fuji system, for some time the longest AF lens I had was the 60mm f2.4. While it’s actually quite a versatile focal length for the kind of shooting I do, I did find myself wishing for something with more reach on many occasions. Last year I picked up the XC 50-230mm f4.5-6.7 at a heavily discounted price. I shot with it for a bit and it’s actually a pretty good piece of kit for the money, but I found the slow maximum aperture limiting. I also found the overall rendering often not to my liking and given how finicky processing X-trans RAWs can be, you really need good glass to get the best from it. So earlier this year I sold it and bought the XF 55-200mm f3.5-4.8. After using it for much of the year, this is my review.

The 55-200 is a hefty, heavy lens at nearly 600g. Owners of similar focal lengths on DSLRs or even Fuji’s 55-140mm f2.8, will scoff at the idea of 600g being heavy – but paired with featherweight bodies like my X-E1, its weight and bulk are very noticeable. I suspect the balance is better on an X-T1 or X-T10, but it’s a combination I’ve yet to be able to try. 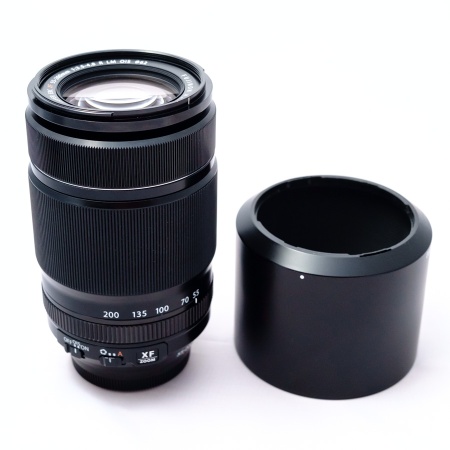 As we’ve come to expect from XF lenses, the 55-200 is solidly built with a mix of metal and quality plastics. The focus ring is firm but moves smoothly, the cool feel of the metal exudes quality. The zoom ring with its rubberised grip looks smart, but is a bit too stiff for my liking. At least it means you don’t need to worry about zoom creep when you tilt the lens up or down, as it will most definitely stay where you’ve left it between shots. The aperture ring is reasonably stiff and will resist accidental changes fairly well. I wish Fuji would put marked aperture rings on all its zooms, the free spinning ones offer scant advantages over a thumb dial on the body, except familiarity of placement. It also has a couple of switches, one for toggling auto-aperture and one for enabling or disabling the image stabiliser.

At 200mm the lens nearly doubles in length, add the hood and it’s pretty serious looking at any focal length. It’s certainly hard to feel inconspicuous using this lens, which may limit its usefulness for some applications such as street photography. The front element is non-rotating as you’d expect on a modern lens and it takes 62mm filters. A filter size it shares with the 23mm f1.4, 56mm f1.2 and 90mm f2, which is unusually practical for Fuji who have a habit of picking a different filter size for each new lens.

The sharpness out of this lens is very impressive. It definitely gets a little weaker as you approach 200mm, but for most of the range the performance is strong, especially at typical working apertures of f5.6 to f8. Wide open there’s enough central sharpness to make it decent for portraiture at any focal length. As is common with Fuji XF lenses, the maximum aperture (at least at the long end) is a little brighter than usual at f4.8, rather than the more typical f5.6. You can use the lens at f4 through to 90mm.

The lens does exhibit some optical distortion which gets slightly more pronounced as you zoom in, but it’s not too extreme. Distortion is automatically corrected in software, so you don’t really need to worry about it. Here’s an example of an image with and without the correction applied (mouse over). The difference in colour rendering is down to one being processed in Lightroom and the other in Iridient Developer. Lightroom won’t let you disable the software distortion correction. 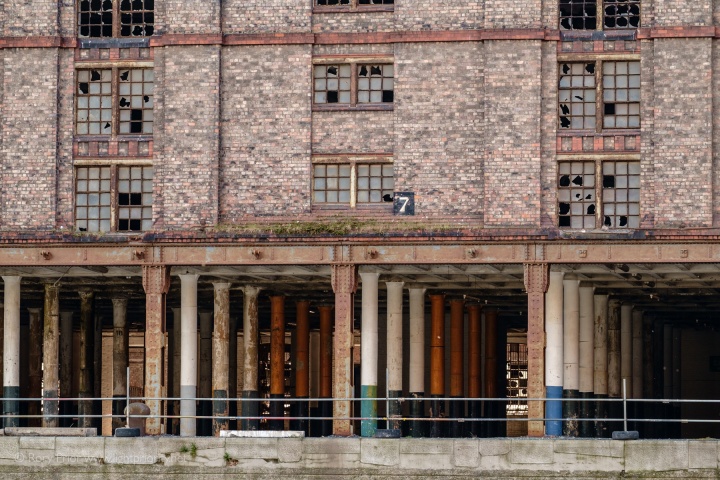 Fine detail rendering is generally very good, which is particularly important with the X-Trans sensor as it helps avoid the ‘watercolour’ look with foliage. That said you need to be aware of the limitations of the optical image stabiliser, if your shutter speed is high it’s worth switching it off as it can introduce enough motion blur to take the edge off the lens’s sharpness. I’ve found using the OIS in mode 2 produces the most consistent results, although this does mean you don’t get a stabilised view when composing your shot. Ideally Fuji would give us the option to set a shutter speed over which the OIS would just disable, so you didn’t need to worry about doing it manually. I’ve not done any formal testing on the effectiveness of the OIS, but I find I can happily shoot 200mm at 1/125 without fear of camera shake. (I usually use auto-ISO with a minimum shutter speed of 1/125)

Focus speed is very good, and bearing in mind this is based on my experience of using it with a slow old X-E1, performance on newer bodies should be excellent. The dual linear motors are quiet and you’re unlikely to hear them working outdoors. I’ve found the lens rarely misses focus and any blurriness usually tends to be my fault rather than the lens’s. 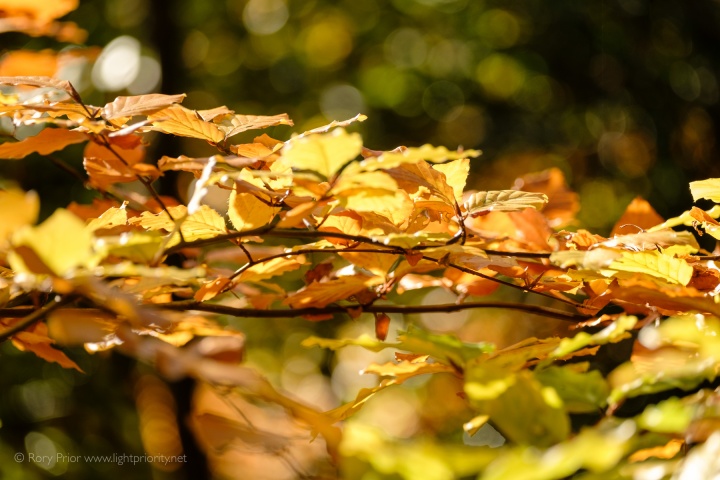 The 55-200’s bokeh won’t win any awards, but it manages to be fairly smooth and pleasing in most situations. There’s an outlining effect visible in highlights and it becomes increasingly cat’s eye like towards the edges of the frame, as shown above. You can get very smooth results with the right background and distance to your subject however, as below with the Bentley hood ornament. 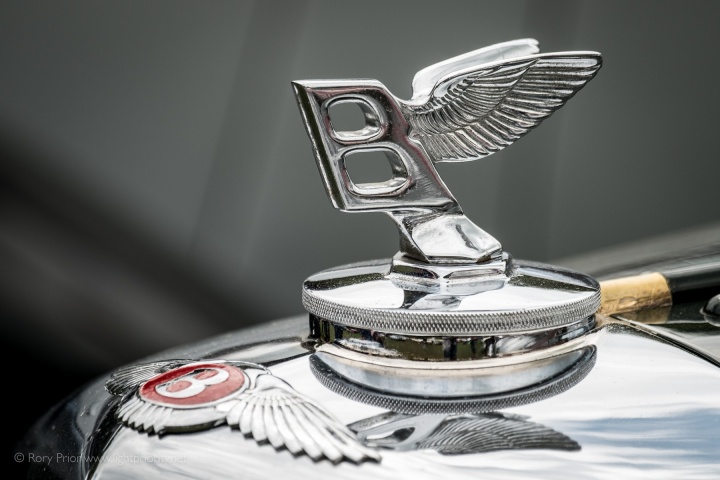 Here are some more shots taken with the 55-200 for your viewing pleasure. It’s a versatile lens and I use it for a mix of detail, wildlife and landscape work. It should also work pretty well for portraiture, although some may find the limited subject separation achievable compared to its faster siblings less desirable, at least with full body portraits. 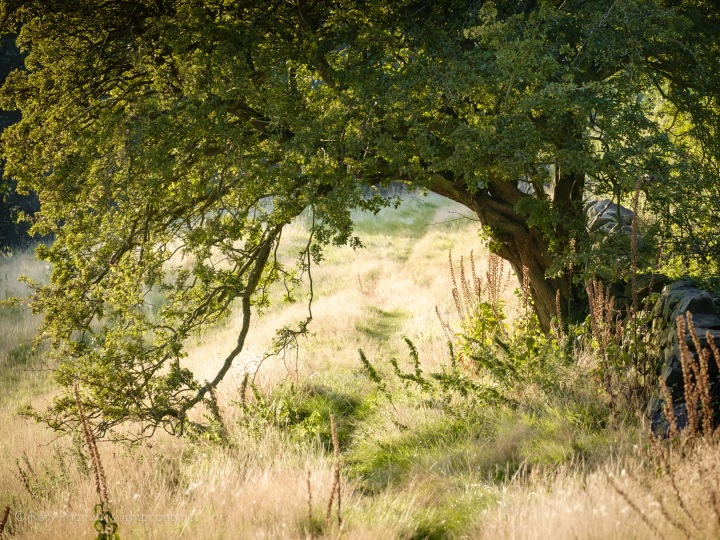 While 200mm is usually too short for wildlife photography, sometimes you get lucky as with the blackbird shot above. For ‘casual’ wildlife photography it can work though, just choose larger or tamer subjects! But don’t expect to be able to get shots of birds from any kind of distance.

While the 55-200 isn’t my favourite Fuji lens, it’s a solid and versatile performer. If you need a focal length beyond 90mm it’s certainly the best option currently available. Its size and weight do feel somewhat at odds with the ethos of the mirrorless world however, which is supposed to be about leaving the heavy, cumbersome kit behind. The XC 50-230 demonstrates you can have good reach in a lightweight package, but it comes with sacrifices in image quality, maximum aperture, build and handling which make it hard to recommend unless price is your primary concern.

Whether Fuji could have made size or weight savings with the 55-200 without resorting to the same compromises as present in the XC lens is uncertain. But to me it feels like many of the XC’s shortcomings are driven by cost saving measures rather than fundamental limitations of lens design.

Fuji has two other zoom lenses whose focal ranges also intersect with the 55-200’s (aside from the 50-230) but which are far more niche products. The 18-135mm f3.5-5.6 “super zoom” will no doubt have its fans, especially due to its weather sealing and pairing with the X-T1 as a kit. But optically it’s more compromised owing to its nearly 8x zoom range. On the other hand, the 55-140mm f2.8 is clearly aimed at the professional market with its fast maximum aperture and top quality optics. However its cost, size and weight will make it impractical for many.

Between those two choices, the 55-200 looks like the most sensible general purpose offering for those looking for quality, but wanting to strike a balance between size and cost. It’s for this reason that this lens is in my kit bag and will remain there for the foreseeable future.

As always if you find my reviews helpful and you like my images, please consider purchasing a print either from the store here or on Etsy. I’m not famous enough to get freebies from Fuji so I need your support to keep both this site running and to keep my camera gear up-to-date.